Your Right to Riches 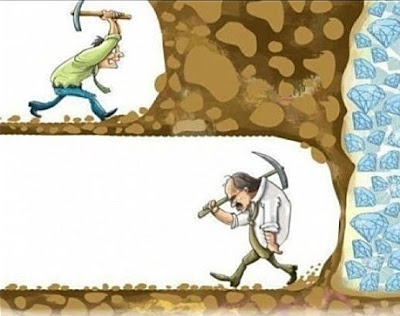 A long while ago, a great warrior faced a situation which made it necessary for him to make a decision which insured his success on the battlefield.  He was about to send his armies against a powerful foe, whose men outnumbered his own.  He loaded his soldiers into boats, sailed to the enemy's country. unloaded soldiers and equipment then gave the order to burn the ships that carried them.  Addressing his men before the first battle, he said, "You see the boats going up in the smoke.  That means that we cannot leave these shores alive unless we win!  We now have no choice - we win - or we perish!"

Every person who wins in any undertaking must be willing to burn his ships and cut all sources of retreat.  Only by so doing can one be sure of maintaining that state of minds known as a burning desire to win, essential for success.

The morning after the Great Chicago fire, a group of merchants stood on State Street, looking at the smoking remains of what had been their stores.  They went into a conference to decide if they would try to rebuild, or leave Chicago.  They reached a decision - all except one - to leave Chicago.

The merchant who decided to stay and rebuild pointed a finger at the remains of his store and said, "Gentlemen, on that very spot I will build the world's greatest store, no matter how many times it may burn down."

That was almost a century ago.  The store was built.  It stands there today, a towering monument to the power of that state of mind known as a burning desire.  The easy thing for Marshall Field to have done would have been exactly what his fellow merchants did.  When the going was hard and the future looked dismal, they pulled up and went where the going seemed easier.

Mark well this difference between Marshall Field and the other merchants, because it is the same difference which distinguishes practically all who succeed from those who fall.

Every human being who reaches the age of understanding of the purpose of money wishes for it.  Wishing will not bring riches.  But desiring riches with a state of mind that becomes an obsession, and backing those plan with persistence which does not recognize failure, will bring riches.

The mind is a servo mechanism.  It works like a guided missile.  When you set a target, the mind then will follow its course to reach its destination.  However, you must commit your purpose to the subconscious mind.  This will lead to the congruence of the words and actions.  This is necessary because our actions will finally determine our results.

It is worth noting that you must believe wholeheartedly in your desire for riches.  Wishful thinking alone will not get you to where you want to be.  This is because, in the course of attaining your desire, you will meet unforeseeable challenges.  It is important that you rise above these challenges and move on.  It is a part of the learning curve that you must endure.  There is no such thing as failure.  Those things that are known to us as failures are actually false starts on our journey to success.

I came across these six steps at a very young age.  At that time I have this strong desire to be a millionaire.  So what I did was I wrote the figure and the dateline to achieve it; which was in five years time.  I then carry this card in my wallet.  Whenever I remembered, I looked at the card and visualized my life as a millionaire.  I worked my ass off too.  From there my income doubled and tripled every year.  On the fifth year, I noticed I only made RM990K.  I was not entirely pleased.  I missed the target by RM10K.  However the next year I made RM1.4 million.  Not bad at all for a thirty-three-year-old with a dream to become rich.

The lesson I want to impart here is that our life must be goal-driven.  You should not be dependent on hope and chances.  Leave that to those compulsive gamblers.  If you don't decide for yourself, somebody will.  That is why nowadays we see companies and the government applying the Balance Score Card System to their workforce.  Failure to plan is planning to fail.  We must have a clear sight of moving towards the future.

There was a study done by an insurance company sometimes back.  They followed the life of one hundred twenty-five year old until they reached the age of sixty-five.  They found out that out of the one hundred, one was rich, four were financially independent and ninety-five were still working or broke.  All because the majority did not have a specific goal to be financially free.

This principle is not limited to acquiring wealth.  It can also be applied in all sort of endeavors.  The key to its success is the burning desire to have it; you must want it bad enough.  Immediately after, take the necessary actions.  The result may not come immediately but rest assured you will attain your desire in due time.  All you got to do is keep your dream alive.

You must believe in your ability, your potential to change for the better.  Only then will you not be denied.