People are normally shaken by external inputs that challenge their belief systems.  This is true especially when comes to politics and religion.

Little did they know these two ideologies are tools to manipulate the masses.  People like Seneca knew this: 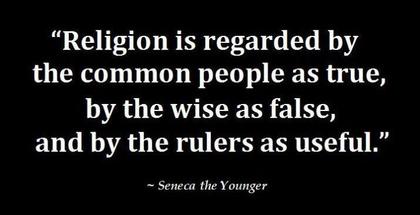 That is why I don't entertain thoughts on politics and religion as stated by my Observation #5:

Observation #5:  Detach from the worldly constraints.  Stay away from politics and religious matters.  They are tools created by the few to manipulate the many.  They are time wasters to the inhabitants of Sparta 4964.  We are governed by a Benevolent Dictator.  Our law is the Martial Law.  We do vote on issues but not on leadership style.  However, we practice open door policy.  Our world is borderless and our citizens are free radicals.  We do not limit freedom of thought, speech, and action.  All subjects are freestylers who exercise their freedom of will.

Throughout history, human race started to screw up when they decided to embrace politics and religion.  It used to be a cooperation between the paleolithic society.  But once agriculture took place, the neolithic people started to squabble over issues of land.  This was fueled by the thirst of the rulers to expand their geographical territory.  This lasted for 10,000 years.  Comparatively for 2.8 million years, tribal feuds were only limited to skirmishes and petty squabbles over hunting grounds.

So what is the best way to get the common people to give up their lives for their rulers?  None other than to elevate the rulers status to become divinities as we had seen in China, Thailand, Egypt, Aztec and medieval Europe.  They knew that by commanding blind loyalty coupled with faith towards God, these rulers then possessed Unlimited Power. 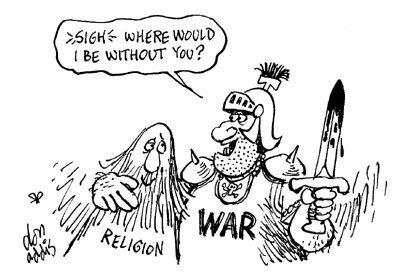 For one thing, killing another human being in the name of God is a bit of an oxymoron.  God can create, surely God can kill.  Why does God need men to do it if he already got the Angel of Death to do His dirty work?

Hence I look with suspicion religions that propagate war.  Is it really God's wish for men to fight against each other in his name or is it a sedition to spread a personal agenda?

Just like Madonna's song, "Road to hell is paved with good intention".  Surely it is hell when war breaks lose.  What is the motive that trigger the war?  As we had seen more than often they are ignited by people who have a deeply ingrained belief that what they are doing is right.  How is it that both warring sides are right?  Again this boils down to the belief systems.

You think most people use their brains and able to decide what is right and what is wrong.  Well don't be too sure.  Many people will not worship a stone.  But give a religious flavor to it, they will without hesitation raise arms and fight tooth and nail for what they believe in.  These are the same people who prostrate to the Stone day in day out. 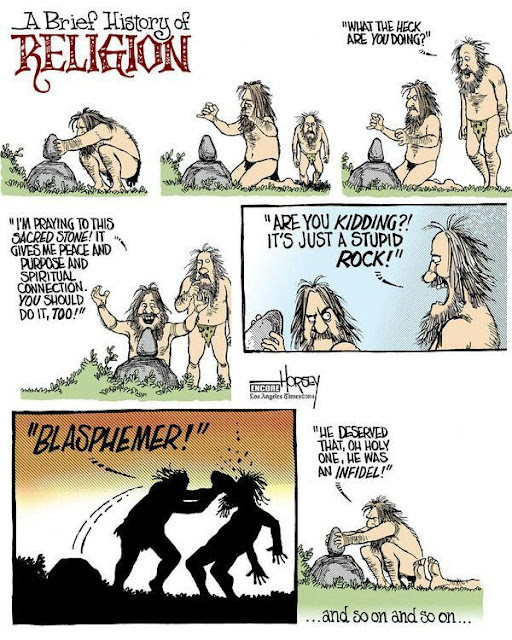 Of course they won't admit they are worshipping the Stone.  To them they are worshiping God.  However intention is nothing, action is everything.  A person intends to do good but his action is stealing. Is he a good person or a bad person?  Same goes when we watch a person worshiping an idol.  Is he worshiping God or is he worshiping an idol?  To him his intention is to worship God and the idol is just a representation.  To us the onlookers, we all say he is an idol worshiper.  Is he a transgressor?  Well nobody is ever guilty for having a bad intention.  Only when he commits the crime will then he'll be judged.

It is wrong to worship the Stone?  It was a pagan practice assimilated to the more recent belief.  Yet many still subscribe to this practice.  Worse, they elevate themselves as the dwellers of paradise and condemn the rest of the population to eternal damnation.  This is not coming from the Most Compassionate and Most Merciful.  This is coming from a very twisted mind among men themselves.

No God is so vain as to create His subjects and then expects them to revere Him as God.  I don't think that is appropriate unless this God is a narcissist.

I don't think this idea comes from God.  This is the work of a man who created God in his image.

So if you read this and you are a Stone Worshiper, please... do not worship the Stone.

Posted by Sharudin Jamal at 6:25 PM No comments: