More than a decade ago, I was diagnosed of having a peculiar illness known as Bipolar Affected Disorder. My world as I known it crumbled; I lost my business, then my job and later my sense of purpose. It was during this dark moments I rediscovered the joy of running and writing. Most of the articles here are about my rekindled pleasure of hitting the tarmac, my coming to terms with the illness and my discovery of the meaning of life.
I always on the lookout for inspirations to write in these three areas with the hope that they will shed new ray of hope to others who are in the same position as I am.
Do keep in touch if you feel connected through these essays.

My Take on World Religions 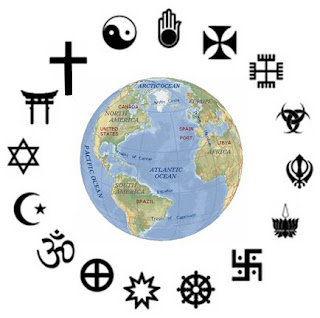 For the longest time, I was a religious scholar before I delved in philosophy, science, and mathematics.  I read the Bhagavad Gita, the teaching of mainstream Buddhism, and Zen Buddhism.  I also read the Bible and  I had eight different variations of the Qurans which include the Quran for the Skeptics and Quran with Sahih Bukhari Annotations.  I was so intrigued by various religions that I visited the Church of Satan website.  Click here for Church of Satan.  It was, however, the book Exploring Religion by Roger Schmidt that allowed me to look at various religions as an academician rather than as a practitioner.  It opened my eyes to the many questions I had about religions that were left unanswered.

The main thing about a religion is, all religions are based on faith; that is belief without evidence.  This is the reason why people like Richard Dawkins and Lawrence Krauss have a field day bashing the theists on their religious beliefs.  There were no rationalizations in religion.  If the religion teaches you that when a fly dropped in your drink, then dunks in the whole fly because the fly's wings both contain the elixir and poison, you believe.  If the religion says be weary of a passing black dog for it is the devil in disguise, you also believe.  If the religion narrates a story that says drink the camel's urine to cure blindness, that too you believe.  Why wouldn't you?  This is your faith.  Non-compliance means blasphemy.  The punishment is eternal damnation!

I had a whole array of research material on religions that I cannot table out.  All because religious zealots are a bunch of highly sensitive people.  They all believe they hold the key to the truth but in actuality, most of them don't even understand or even finish reading their holy books.  I, however, took the approach of a bewildered kid entering a library for the first time.  Once I asked a Hindu devotee why he worships cows?  To me, it's an animal that is inferior to us humans.

He replied, "The cow had given humans so much.  Everything about the cow is sacred.  The cow gave its life to humans by toiling the land, its milk for feeding the infants and the dung for fuel and fertilizer."

And so, I gained a new insight towards Hinduism.  Animals are sacred.  Now I also understand why they revere Ganesh, the elephant God and why in India there is a temple, especially for rats.

I also often marveled by the stories of miracles.  Why was it that miracles happened in the past?  Why can't present day people meet with angels?  Why can't the modern man witness the burning bush or  see a man walking on water?   Carl Sagan offers an explanation.  He wrote in his book, The Demon Haunted World that some of these prophetic traits were signs of mental illness.  I can attest to that.  I had dreamt of a star bursting one night and I too had been visited by angels during my mania.  I can relate well to the story of John Nash, a Nobel Laureate in Economics,  who sees figures others cannot see. Below is the documentary.  You should also watch the movie A Beautiful Mind starring Russel Crowe:

I can vouch that at least a couple of the prophets had these traits.  In a book, a psychography written about one of them, there are very clear pieces of evidence that this person was suffering from the illusion of grandeur, narcissism complexity, and schizophrenia.  However, due to the sensitivity of the topic, I present to you the cases of St. Paul of Tarsus, click here to learn more about St. Paul and St. Christina the Astonishing for comparison, click here to learn more about St. Christina.

Having to understand the world religions and their idiosyncrasies does not make me less respectful of the existing religions.  They are the foundation of human morality at large.  Though some of the teachings are no longer applicable to the mainstream, religions are the glue that binds the society together.  When the USSR collapse in 1991, the very first things that popped up like mushrooms were orthodox religions.

Religions make us feel connected to the Creator.  When we are sad or distressed, the first thing for religious people to do is pray.  For those without religion, the first thing they do is hit the bottle.  Richard Branson claimed he is an atheist.  But when asked what did he do in a life-threatening situation, he replied, "I prayed to God to save my life."  Then he laughed at the interviewer.

There is a quote by Steven Weinberg, a Nobel Prize Winner in Physics:

I do not wish for this posting to be a religious polemic.  There are plenty of those debates going on in You Tube.  I just want to say that every religion is sacred to the believers.  I, however, celebrate all religions.  When I visit Ah Ho my mechanic, I will light up a joss stick at his workshop's shrine.  When I visit Muru, my pothead friend, I will leave some coins at the Ganesh's altar.  My family and I will normally have a special lunch or dinner whenever there is a religious holiday.

Religion to me is like a multi-facade lamp shade.  Though the shade has various angles, the source of the light is all the same.  It is this light that illuminates all the religions.  No one religion can claim the exclusivity of the Source.

Below is a documentary on Temporal Lobe Epilepsy, a rare mental illness that might shed us a better understanding of the meaning of God.  This was part of my landmark research when I was trying to comprehend God sometimes back:

Sharudin Jamal
To his friends Sharudin Jamal is an adventurer and a knowledge explorer. A member of the prestigious Alumni Sekolah Sultan Alam Shah,Putrajaya, Malaysia and a University of North Texas graduate, later in his creer he wore many hats within his 25 years on becoming an international corporate achiever. He had vast experience in IT sales collaborating with IBM, Apple, Fujitsu, HP, Hitachi Data Systems and Ingenico. He also had consulting, training and coaching background dealing with more than 40 clients nationwide. These include the government of Malaysia, banks, insurance companies, manufacturing sectors, public listed companies and nonprofit organizations. His lifetime accomplishments include on being an IBM/Mesiniaga Hundred Percent Club qualifier for 3 consecutive years, appearing in Selamat Pagi Malaysia (Good Morning Malaysia) - Radio & TV Malaysia (RTM) for more than a dozen times, training 2,000 Sapura Group of Companies staff on Vision Alignment for the New Millennium and completing his first 42 km run in Kuala Lumpur International Marathon at the age of 40.