Death is Only the Beginning 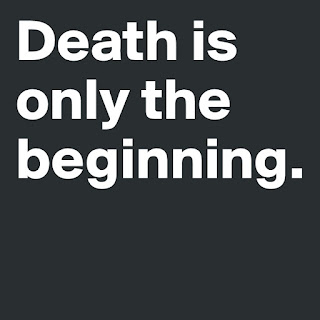 A friend of mine passed away last week.  He was 53, died of lung cancer.  Two weeks before his death I met him at my daughter's school where two of his children attended.  He looked calm and peaceful.  His voice was a bit coarse, but he was ever smiling and in a good mood.

I reflected a lot upon my friend's demise since our age is one year apart.  It was not a surprise.  He has been going on chemotherapy since beginning of the year.  I guessed he expected it coming because he quit smoking this same year.  A very unlikely gesture considering he is a chain smoker who even smoke in the school compound which is a boarding school.

I quit smoking for five days because of that.  Ended I sleep most of the time because I seemed to have plenty of it without the cigarette. My thinking is my friend didn't get a second chance to rectify his situation, I do.

I also had a lengthy discussion with my wife about death on that day.  My concern was regarding untimely death.  Her perspective was a very enlighting one.  She said death is inevitable.  Everybody will experience death once in their life.  What counts is if you had lived your life to the fullest.  My deceased friend seemed to be in the category.  He was an accomplished businessman, the children are bright and at a young age, he already had two grandchildren.  That is fulfillment to my wife.

I started to look back at my accomplishments and I too am quite pleased with my life.  Furthermore, I recently watched my uncle passed away last year due to Alzheimer and it was not a pretty picture.  Old age disease can be very degrading.  In the end, everybody goes but each has his own exit.

One thing I learned from my friend was that we need not fear death.  One day it will come.  What's the point of living your life unfulfilled?  My wife argued.  My friend left us without gaining his consciousness on the day he took his last breath.

Dr. Deepak Chopra described death as a transformation from us being a caterpillar into a butterfly.  Death is the creative leap for us to go from one state to the other.  If that is the case, then all deaths are a celebration.  Not all societies mourn over the dead.  The Toraja tribe of Kalimantan celebrate the death of their loved ones with full festivities.  In Mexico, there is a night that was set aside to celebrate the dead.  I too never mourn over death.  An Indonesian philosopher said death is a long, long sleep.  Funny, when I looked at the faces of dead people, it was as if they were sleeping.

Shortly after the episode, another friend passed an article from the newspaper.  The title was, "10 Commandments for the Over-50s."  The last point caught my attention - Befriend Death.  Don't be afraid of death.  It's a natural part of the cycle of life.  So, prepare yourself not for death but for a new life, said the article.

The ancient Samurais had a credo to live life - "Shinu Kikai O Motomo", looking for the opportunity to die.  To live an honorable life was most sought after for the Samurais, but to die with honor was desirable.

Upon death, life has no meaning to the one passing on.  What counts is the legacy the person leaves behind.  The meaning left behind was for the living to decipher.  In his death bed, Steve Jobs final words were, "Wow, oh... wow, oh... wow."  Whether he was saying goodbye to his life or welcoming death, nobody was certain.  Somehow it seemed to be good parting words from one of the greatest innovators of our time.

Death is as certain as the nightfall.  Do not fear death.  Live your life without excuses, fear or regrets.  Only then death becomes a new beginning.  A guy that I know envisioned death as a balloon pops.  Beyond that point there is nothing.  We cease to exist.  That is fine too...  As long as you live your life to the fullest.

The truth is we don't know what lies beyond death.  We only got a glimpse of it based on Near Death Experiences (NDE) and the experiences can be both exhilarating and daunting.  Good news is, we will not have to worry about it until we cross the bridge.  Until then life is meant to be cherished.  There is no other life as beautiful as our own.  Nobody wants to live another person's life.  We own it and we make the best of what we have.  As for death, let it come.  Sooner or later doesn't seem to matter for those who accepts death as part of living.

Posted by Sharudin Jamal at 9:22 PM